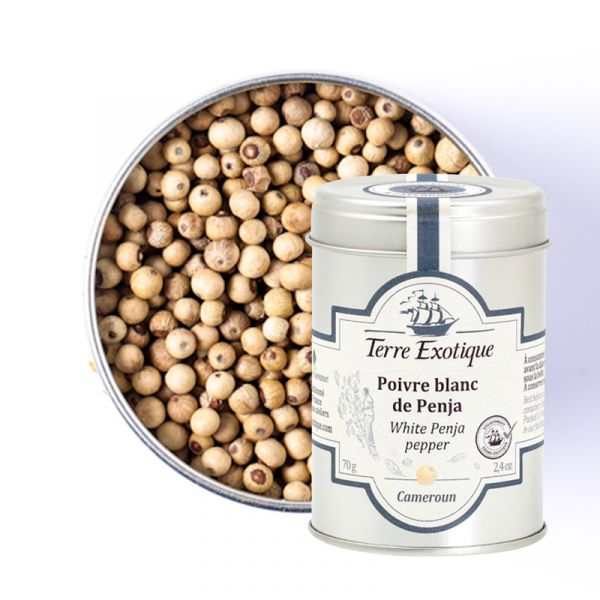 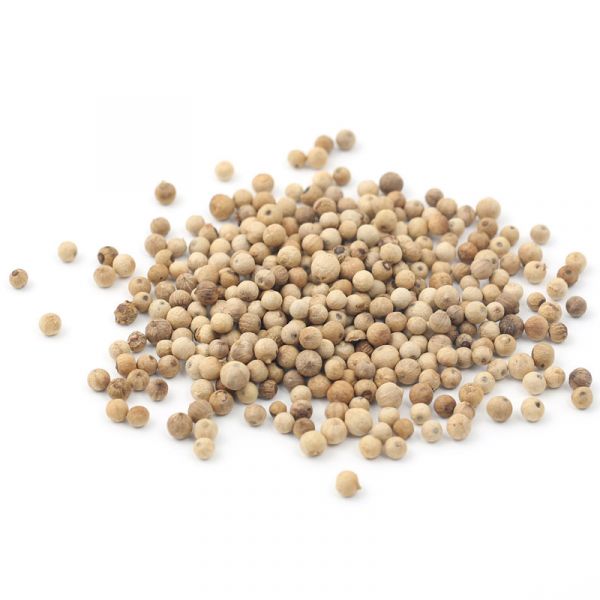 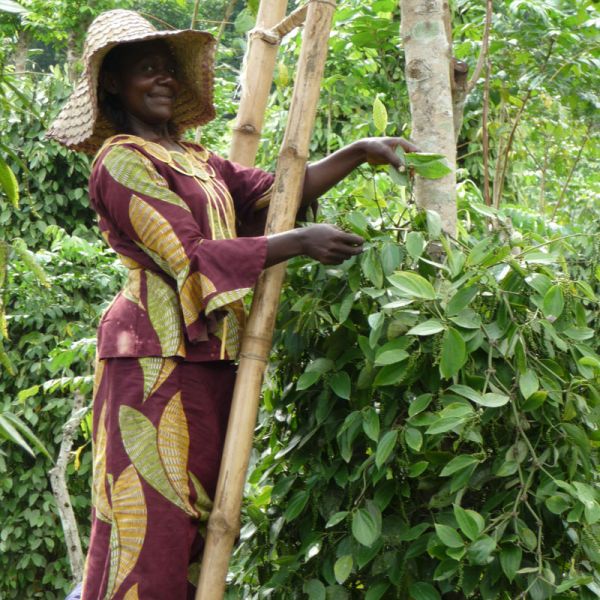 The perfect companion for your pepper mill ! This white Penja pepper with its animal notes and aromas of menthol has truly outstanding character and flavour. In 2014, it became the first product of the African continent to obtain Protected Geographic Indication status (PGI). Use cracked lightly for a delightful daily touch to all your dishes.

As low as €9.25
Details
More Information
Reviews
Details
Penja white pepper, a supple and complex treasure from Cameroon
This is Terre Exotique’s MUST HAVE for your peppermill! Penja white pepper with its animal notes and aromas of menthol has truly outstanding distinctive flavours.
Penja white pepper: a grand cru pepper!
An amazing pepper which grows in the heart of Cameroon
Penja white pepper is enchanting with its powerful  tastes and woody aroma. It is the fruit of a giant creeper: Piper nigrum. It grows up trees with rough, cracked bark which helps it grip on and climb up often as high as four metres. It is pollinated by the rain, which is frequent in the region of Moungo. The rich and fertile volcanic soils of Cameroon give Penja pepper its truly remarkable aromas and highly concentrated essential oils.

How is Penja white pepper obtained?

Penja white pepper  is picked when fully ripe, washed, its pulp removed, then dried in the sun in the province of Moungo in Cameroon. All the production stages (harvest, retting, washing, drying, sorting) are entirely carried out by the expert hands of the local village women. Unlike other colours of pepper, white pepper is picked when fully ripe. It is then washed thoroughly and dried to remove its pericarp. This is what gives it its strong flavour.

Penja pepper is certainly a renowned gastronomic star worldwide! In 2014, it was the first product from the African continent to gain Indication Protected Geographical Indication (PGI) status. A well-deserved recognition for this precious pepper.

This white pepper has delicious supple and musky aromas due to the rich fertile soils of Cameroon. Its initial attack is hot and spicy, with longer animal and herby notes, especially when cracked rather than ground. It’s a complex but well-balanced pepper, the perfect companion for red meat or braised game.
What recipes are best with Penja white pepper?
Original dessert ideas with Penja white pepper
If you’re feeling adventurous, try out Penja pepper in your fruit desserts! Grind it finely and sprinkle over a pear and vanilla tart. In the summer, add a pinch to fresh strawberries doused with freshly squeezed lime juice. Impress your guests with this indulgent dessert -  pan fried sliced pineapple served with Madagascar vanilla ice-cream and a sprinkling of Penja white pepper!
Fish and Meat with Penja pepper
The musky complexity of this white pepper is simply divine with strong flavoured meat and fish. Grind and sprinkle over your dish just before serving to keep all its fresh aromas. Marry with:
• An oven roast turbot with meat stock,
• Roast asparagus with butter,
• Fillet of beef or braised pork,
• Roast rack of lamb with thyme.

Where does Penja  pepper come from?
In search of peppers and spices…
The conquest of pepper is linked to the exploration of India, Africa and the New World as it was when Christopher Columbus set out in search of pepper that he discovered … America! Also, when the Portuguese explorer Vasco de Gama reached India in 1498, the merchants asked him why he had sailed so far. His reply was “I come in search of Christians and spices!”. This is when pepper, “pippali” in sanskrit and “piper” in latin was discovered. It is believed that the first pepper creepers probably came from the West coast of India and more specifically the Malabar coast. They apparently grew in the wild more than 4,000 years ago!
What is the difference between white, black and green  peppers?
Whether green, black or white, pepper comes from the same fruit, harvested at different stages of maturity. Green pepper is harvested before fully ripe, and releases fresh, lemony notes. Black pepper is picked just before it ripens then dried in the sun. Its aromas are full-bodied and spicy. White pepper is picked when fully ripe, washed, the pericarp removed, unlike black pepper which keeps its pericarp. It has a more powerful and complex aromatic range!

Penja pepper is one of last introductions  of Piper nigrum outside its endemic Indian origin. The first pepper plants were planted in Penja in the 1930’s by Mr. Decré, a banana plantation owner. The annual worldwide production is very small-scale, only amounting to 18 tonnes. The harvest remains traditional, always done by hand and none of the cleaning, drying or sorting methods have changed for generations. All this makes Penja pepper a rare and precious treasure in line with its amazing flavour.
More Information
Reviews