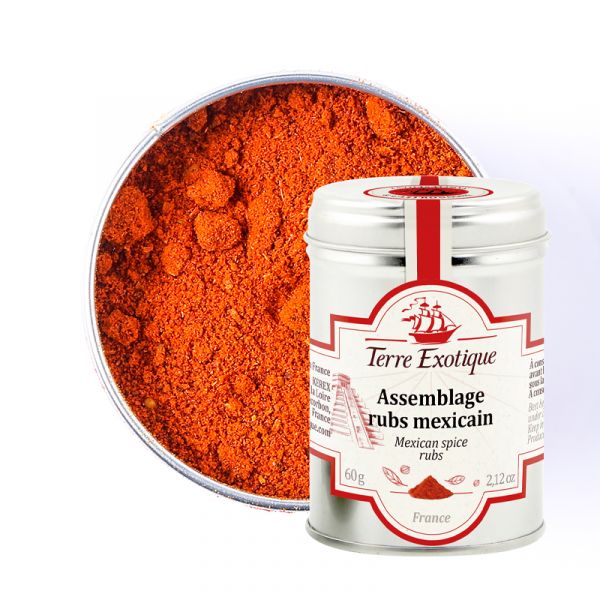 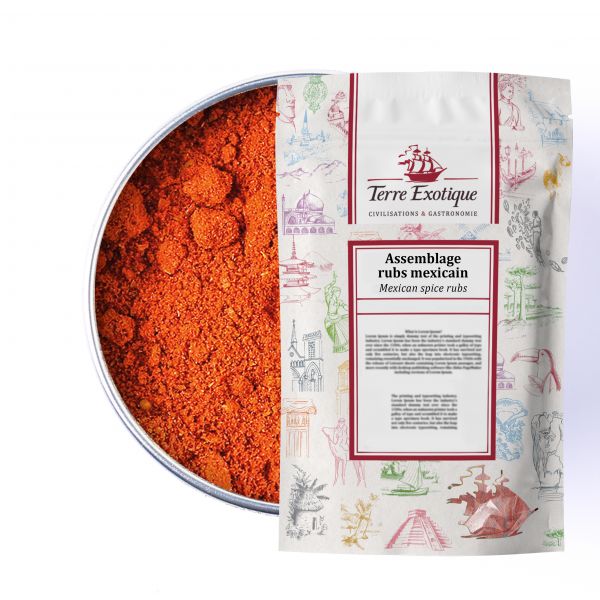 Terre Exotique’s Mexican rub was inspired by the well-known Mexican seasoning. Everyone knows that the Mexicans love their chillis, but this always goes hand-in-hand with lemon!

When to use this Mexican rub?

Explore Mexico and all its flavours

This blend of Mexican inspired spices is hot and full of strong flavours to enliven the simplest of dishes!

How to get the best from your Mexican rub?

Our recipe ideas for this Mexican rub:

·        Chamoy sauce: add 2 teaspoons to your ingredients, except the lime juice and cook for 20 minutes;

·        Mexican tacos: sprinkle a pinch of Mexican rub on your tacos before serving;

·        Michelada cocktail: dip the rim of your glass into the juice from one lime, then roll the glass in the Mexican dry rub;

·        Fajitas: sprinkle a pinch of Mexican rub on your fajitas before serving;

·        Mexican potato wedges: sprinkle the Mexican rub mix over your potato wedges before roasting in the oven;

·        Mexican vinaigrette: mix a teaspoon of Mexican rub with some oil, cider vinegar, honey to a deliciously spicy for dressing for a salad with rice, red beans, sweetcorn, red onions, bell peppers and bacon lardons.

Preheat your plancha. Remove the skin and the center from the pineapple. Chop into chunks. Caramelize the brown sugar in a pan then add the pineapple. Add the Mexican rub mix and stir well. Fry your pineapple on the plancha for 5 minutes. Enjoy as a dessert or as a side with grilled meat and rice.

This mix comes to you direct from Mexico

This hot and spicy Mexican recipe will sublime all your dishes. The fruity notes of the Cayenne pepper are counterbalanced by the sharp, tangy bite of citrus. This mix is perfect for connoisseurs of hot chilli flavours, as the Cayenne pepper will set your tastebuds on fire!

Your palate will love Terre Exotique’s Mexican rub hot mix which will bring a fresh tangy zest to your dishes. It is hot and spicy yet fruity too, the perfect balance will add a Mexican hint to the simplest of recipes.

The famous Mexican blend of spices

A rub, which is a dry marinade, is a blend of spices that is rubbed onto meat before cooking.

Your palate will love Terre Exotique’s Mexican rub hot mix which will bring a fresh tangy zest to your dishes. It is made from paprika, lime, salt and Cayenne pepper.

The paprika in this mix comes from the Zitava region in Slovakia. Its botanical name Capsicum annuum is part of the Solanaceae family like bell peppers and chilli peppers. It has been cultivated in Slovakia using traditional methods for over 100 years. Paprika, is a mild chilli pepper from Colombia and the Southern states of the United States.

Its scientific name is Capsicum frutescens and is part of the Solanaceae family, like paprika. It is also grown in Madagascar, the Democratic Republic of Congo and Zanzibar.

Where does this mix Mexican rub come from?

The recipe for Mexican dry rub was created by Horacio Fernandez in 1985. He used his grand-mother's vinaigrette recipe for inspiration and called his new blend Tajin, in tribute to El Tajin, the archeological site in Southern Mexico that he had discovered on his travels.

Mexican cuisine is renowned for its wide use of lots of spices. Chilli pepper and meat  are very present in Mexico's culinary culture, so chilli marinades are used in many recipes. The Mexican rub is a dry marinade, which is simply rubbed onto the meat to enhance all the strong aromas.

In the Southern States of the U.S. when America was conquered by the Spanish and the Portuguese, they discovered a new cooking technique used by the Indigenous people called barbacoa (barbeque). Spices were rubbed directly on meat to enhance the flavours. Sprinkled or rubbed on meat, the rub became a culinary tradition. Then, after the war in the fifties this tradition spread throughout the world.

The rub spice mix is used in South American traditional cuisine past and present.