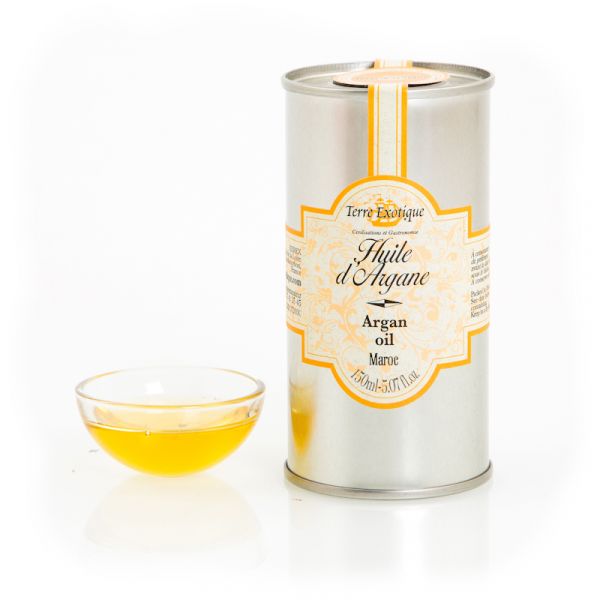 Expertly made by Moroccan women, this Argan oil will add a taste of hazelnut to salads, fish, semolina and desserts.

Argan oil, the treasure of Moroccan women. For centuries, Berber women have produced Argan oil for use in cooking for local people. The majority of the oil produced comes from women’s co-operatives. These help improve the working conditions of women in rural areas while maintaining the age-old tradition of hand pressing Argan oil.

Argan oil production :The argan tree is endemic to Morocco. The fruit look somewhat like olives. They contain a hard nut which itself contains kernels. The women crush the fruit to extract the nut, then with a sharp strike of a stone, break open the nut to retrieve the kernels.

This rare and precious oil is roasted before being pressed, which gives it its subtle taste of hazelnut and sesame, delicious on a carrot and orange salad, or on bread and pancakes. But it is an endangered species! The Arganeraie is getting smaller all the time with 600 hectares disappearing every year, due to desertification and goats climbing the trees to eat the leaves and fruit. The Arganeraie has been classed a biosphere reserve by UNESCO.

Mix flour and water then knead in a mixer (10 mins) or by hand (30 mins). Roll into small balls about the size of an egg and roll out each ball on an oiled work surface until it is transparent. Fold it into 4 to form a square making sure you put Argan oil between each fold, then cook in butter. Indulge with honey for a tasty breakfast.