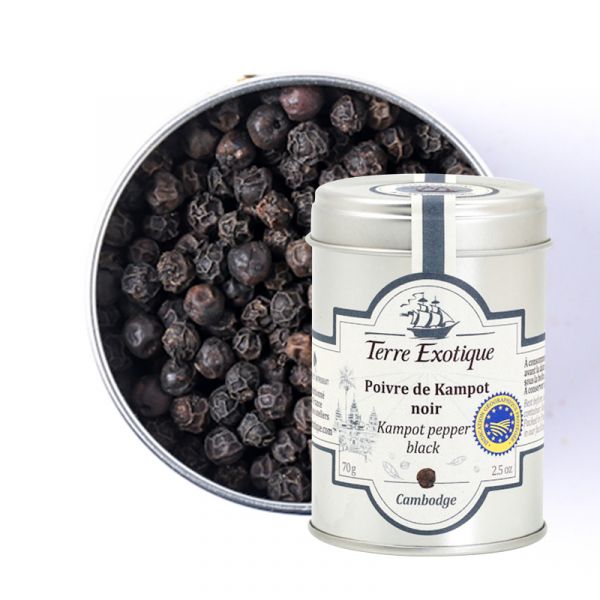 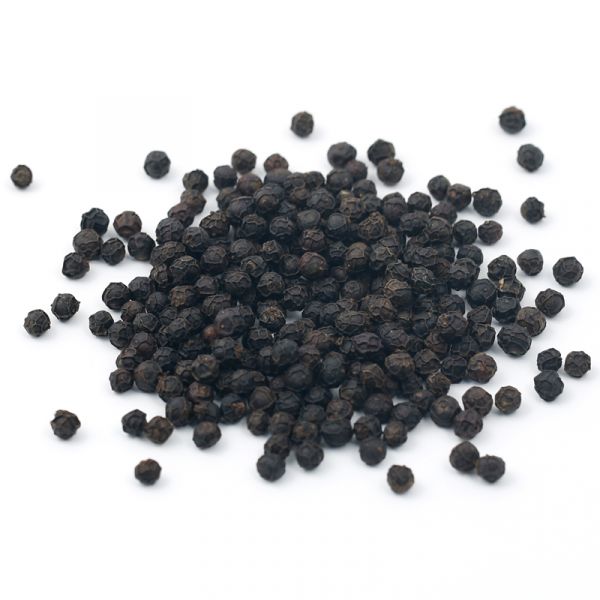 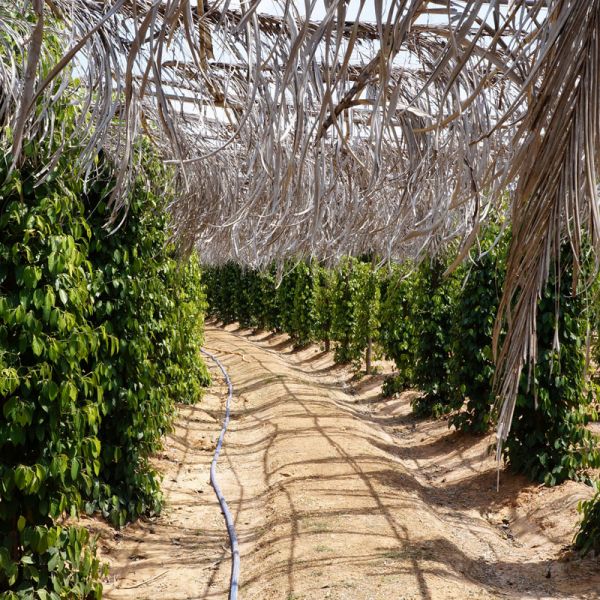 When ground with a pestle and mortar, Black Kampot pepper releases its fruity and menthol notes. Use cracked lightly for a daily delightful touch to all your dishes.

Grind these Kampot black peppercorns to release their fruity aromas with hints of menthol for all culinary creations.

So where does Kampot pepper come from?

Kampot pepper is part of the Piper Nigrum species. It is produced in several regions around the world: India, Cameroon and Cambodia. There are three different Kampot peppers, each one corresponds to the maturity at which they are harvested. The berries of black pepper are harvested just before they are fully ripe (after green pepper and before red and white pepper) and are then left out to dry. They keep their pericarp and their centre is well defined.

Piper Nigrum is a creeper and can grow up to four metres high, using stakes to grow. In Cambodia, it grows in the provinces of Kampot and Kep, in the South, along the coast. Kampot pepper flourishes with the humidity of the tropical climate and the hot temperatures.

Kampot black pepper has a distinctive fruity, balsamic and empyreumatic aromatic footprint (grilled and roasted notes), and is surprisingly complex. It releases notes of menthol and cocoa. It is fairly strong, rated 5 on a scale of 7 releasing ardent and intense aromas. Be careful not to cook Kampot black pepper too long or it will become bitter.

How to get the best from Kampot black pepper

• Traditional Cambodian recipe: grilled beef, Lok-Lak sauce with Kampot pepper. To make the Lok-Lak sauce, mix the beef stock, a pinch of sugar, lime juice and cracked black pepper together. Grill your piece of beef and place it on a bed of fresh herbs: coriander, sorrel and lemon grass. Dip each piece of meat in the sauce and enjoy!

Kampot pepper is perfect used in pepper sauce, to enhance your steaks, game or pork. To make your pepper sauce, melt butter in a saucepan over a low heat and add flour. Then pour in the water and beat quickly. Then add the meat stock (stock cubes or liquid, which replaces the water) and balsamic vinegar, or red wine for extra indulgence! At the end, crush your Kampot black pepper with a pestle and mortar and sprinkle into the sauce. A dollop of cream, and your sauce is ready to serve!

Kampot black pepper: delve into the history of Cambodia

This piper nigrum comes from the provinces of Kampot and Kep, in Southern Cambodia. There are written traces of this pepper in the travel diaries of the Chinese explorer Tcheou Ta Kouanau as far back as the 13th century, which means this pepper dates back to at least the kingdom of Angkor. It was the Chinese immigrants from the region of Hainan who introduced pepper to Kampot. They already farmed it in China. It was during colonial times that Kampot pepper reached its peak and became a much sought after imported product. From 1975, the Khmer Rouge destroyed its production and replaced it by rice. It was not until thirty years later that a few farming families revived Kampot pepper!

Kampot pepper is protected by a PGI since 2009

PGI (Protected Geographical Indication) is a guarantee of quality which promotes a geographical region’s expertise and protects its production. Kampot pepper, which thrives in the climate of Southern Cambodia, also benefits from expert craftsmanship. The farmers harvest the drupes from the creepers by hand at heights of up to four metres. The peppercorns are then sorted by hand and dried in the sun before being graded by expert hands. In 2009 Kampot pepper became the first Cambodian product to gain PGI status. Indeed, the Cambodian farmers were helped by the French Union of Espelette chilli pepper farmers, to obtain the PGI with the AFD (French Development Agency). PGI status increased Kampot pepper farmers’ earnings tenfold! What a wonderful example of international solidarity between farmers!
More Information
Reviews